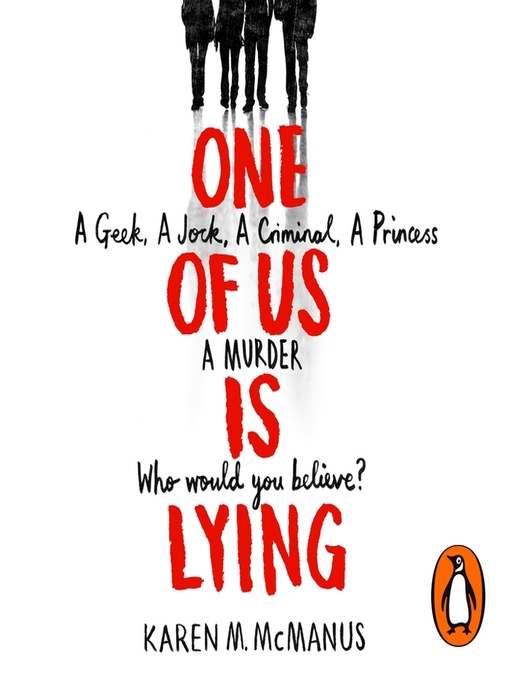 I had seen this book in passing a good while ago and finally got around to reading it. In short, “One of Us is Lying” is a Young Adult mystery novel by Karen M. McManus about four kids who are suspects in the murder of their classmate. The four of them end up in detention together one day, and end up witnessing the death of Simon Kelleher, the school gossip, right there in front of them.

Interestingly, the novel uses multiple perspectives (in first person) to show the story from the point of view of each of the main suspects in the case; Bronwyn, Addy, Cooper and Nate. As the story progresses, we get to know each of them individually as they try to puzzle out what happened to Simon.

Without further ado, let me share my thoughts. I’ll try and be vague for now, but honestly, I don’t know how people review books without discussing the end of the story. So I have a paragraph later on – clearly labelled “spoilers!” to divulge my thoughts on the outcome of the mystery. It’s up to you how much you read.

Anyway, overall, it’s a solid novel and a very intriguing story that keeps you guessing until the very end. The title itself leads you to believe that one of the four are guilty of the murder. A very interesting premise, especially when you get to see the story from each of the suspects, what they’re thinking and how they’re feeling. I found myself looking for clues everywhere, trying to puzzle it out but naturally, it stumped me. The conclusion or “solution” was truly a surprise in the end so I’d highly recommend it to any mystery fan.

Initially, I felt very put off by the narrative style. As mentioned above, the narrative is in first person from each characters point of view but as a reader, I often find this style confusing and hard to keep straight in my head. I don’t know if that’s just me but I personally think it’s a very risky choice as an author. I often find myself forgetting which character I’m with and having to flick back to the start of the scene to remember. This novel was no different in that regard. It’s all very well putting the name of the character at the start of the scene/chapter, but each POV should sound somewhat different in its voice. There needs to be something to really aid the reader. That’s my biggest issue with this novel. I just found it tough to be swapping so much between the characters with very little distinction in the narrative.

The cover of the novel also sets up each of the characters as typical high school archetypes. Bronwyn is the “brain”, Addy is the “princess”, Cooper is the “jock” and Nate is the “criminal”.

Each of them live up to their archetype in their own way, but they also have hidden secrets that make them more complex. Simon Kelleher was not only a gossip in the usual sense, but he ran an actual app called “About That” wherein he would divulge the darkest secrets and misdemeanours of his classmates for everyone to see (he would use initials to support anonymity, but those are easy to figure out). He had one last blog post about our fated four ready to go at the time of his death. Their deepest secrets within, it provides clear motive for his murder.

When the group learn about the unpublished blog, it sets the wheels in motion for each of them and their own interanl struggle throughout the story. I won’t give away what those secrets are, but they provide a nice layer of subplot beneath the murder mystery to really enrich the story. In the end, they end up confronting – and owning up to – their secrets, to become better people.

I’ll try to be vague, here but I truly think Addy (or Adelaide’s) story was set up to be one of the most interesting, but the author didn’t fully give into it. Very early on in the story, it’s clear that Addy’s boyfriend, Jake, is very controlling of her, constantly gaslighting her and downright manipulating her. Mild spoiler: when they do part ways, I felt like Addy “got over it” very quickly. She got a haircut and suddenly seemed to realise how terrible Jake was. I would’ve expected their realtionship to have left a much more lasting effect on Addy’s psyche. I felt it was a huge opportunity to explore the realms of emotional abuse and I just think it’s a shame that it kinda fell to the side.

“One of Us is Lying” has its flaws, in my opinion, but is still a solid novel and a very intriguing story. The characters each have their own little subplot beneath the murder mystery to keep the reader interested. I think the perspective style could’ve been done a little better to distinguish between each character, but it was a unique structure style, at least. It was fun to try and figure out what really happened along the way and the ending is a real surprise that will stun you.

If you’ve read it, I would love to hear your thoughts (especially about the ending!).